It’s been a while since I traveled on Virgin America, so I was quite excited to find out what their airline food was like. Now, strictly speaking, it seems that US domestic flights don’t “do” food anymore. Instead, travelers are encouraged to buy small plastic-encased portions of food at inflated prices. I’m not complaining about this, as I’m hopeful it makes my air ticket cheaper, but there’s a certain part of me that’s nostalgic for the fancy aeroplane meals that come on trays.

As a child, I recall looking at advertisements for Malaysian Airlines which showed beaming travelers tucking into lobsters, and though nobody has ever offered me anything other than “chicken or beef?”, I still cling to that hope. In the meantime, there’s something charming about doll-size portions of meat and vegetables, all neatly laid out on a sectioned tray. I also love the midnight service of cup ramen, which is the best part of an international flight to Asia. There’s a certain frisson to clutching a styrofoam cup of steaming MSG in a hushed and eerie darkness, dimly lit by the flickering images from other people’s movie screens. 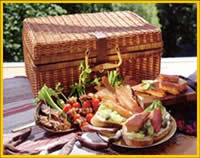 Unfortunately, there was no cup ramen on my cross-country flight and in the morning rush, I only managed to pack a few sad-looking ham sandwiches and some clementines. It’s too bad as I’ve always had secret visions of whipping out a luxurious picnic hamper, like the unfortunate prostitute in Guy De Maupassant’s story “Boule de Suif”, and nibbling on delicacies like duck confit nestled in a bed of fennel and apple salad on my tiny fold-out table. Or carving thin slivers of salami or Manchego cheese. Such daydreams are unlikely, however, since I didn’t even remember to pack napkins, let alone a gigantic basket stuffed with foie gras. Besides, nobody is allowed to carry pocket knives on board anymore.

I was excited to discover, however, that you can now order food through your individual touch screen TV and pay for it by swiping your credit card. Giddy that humanity was finally moving towards Willy Wonka’s visionary TV chocolate, I studied the menu. Virgin America has clearly tried to position itself as a trend setter. The usual suspects of chips and nuts are redeployed under the guise of “Artisan Cheese Box” (cheese and crackers) and “Protein Meal” (nuts and energy bars). Not to be outdone, I pressed the button for “Non-GMO caramel popcorn sprinkled with sea salt” (100cal) and waited. It arrived in precisely in 3 minutes, brought by a passing stewardess. Later, I also ordered some dried fruit and nuts mashed together and Pringles. Each came in under 5 minutes, delivered in the same noiselessly unobtrusive manner. 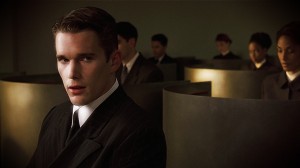 It was an odd experience, yet strangely addictive. Looking around at my fellow travelers, all of us feverishly tapping away at screens and tablets, I was reminded of the sci-fi movie Gattaca, which offers an achingly well-designed future filled with silent hallways and people hurrying away on some kind of business. I don’t know whether the people behind Virgin are forging into this futuristic ideal, or whether they’ve drawn their inspiration directly from movies, but the result is a kind of self-fulfilling loop, where a picnic basket (a la Guy De Maupassant) probably doesn’t make carry-on size limits.